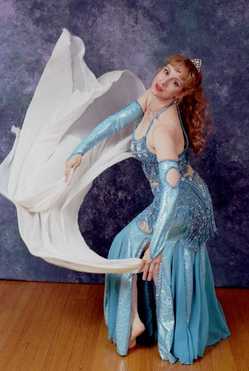 Studies
Ellie's passion for dance began at an early age studying classical ballet and she eventually earned a B.A. in dance from Barat College. In 1996, Ellie began exploring the world of belly dance.  She studied with some of the great Egyptian masters including Yousry Sharif in New York, Dr. Mo Gedawwy, Raqia Hassan, and Aida Noor. In 2006, Ellie traveled to Egypt and studied with Mahmoud Reda, founder of the renowned Reda Troupe, and Farida Fahmy, queen of Egyptian dance. Ellie was one of the first dancers to receive a certificate in Egyptian dance from Egypt.

Performance
Ellie has performed in belly dance venues all around the country including Little Egypt's "Ahlan Cairo Nights" in Texas; Raqia Hassan's Seminar and Show in California; and Aziza's "East Meets West" performance in Chicago. In 2007, she danced in the Lyric Opera of Chicago's production of Salome and later performed at their gala fundraiser. Ellie won 3rd place in the Maqam Challenge and served as one of the judges for the 2008 competition. Ellie has written many articles on belly dance and was a contributing writer for The Chronicles.


​Ellie is a well-seasoned, riveting performer and is known for her graceful, sensuous dance style. She captivates her audience with her enigmatic stage presence and innate sense of artistry.  She is a devoted teacher and generously imparts her knowledge and skill with all of her students
​